Percussion Education at its finest

John Kasica shows that a Tambourine, is more than a tambourine.  Especially when it’s a Harlan Tambourine. 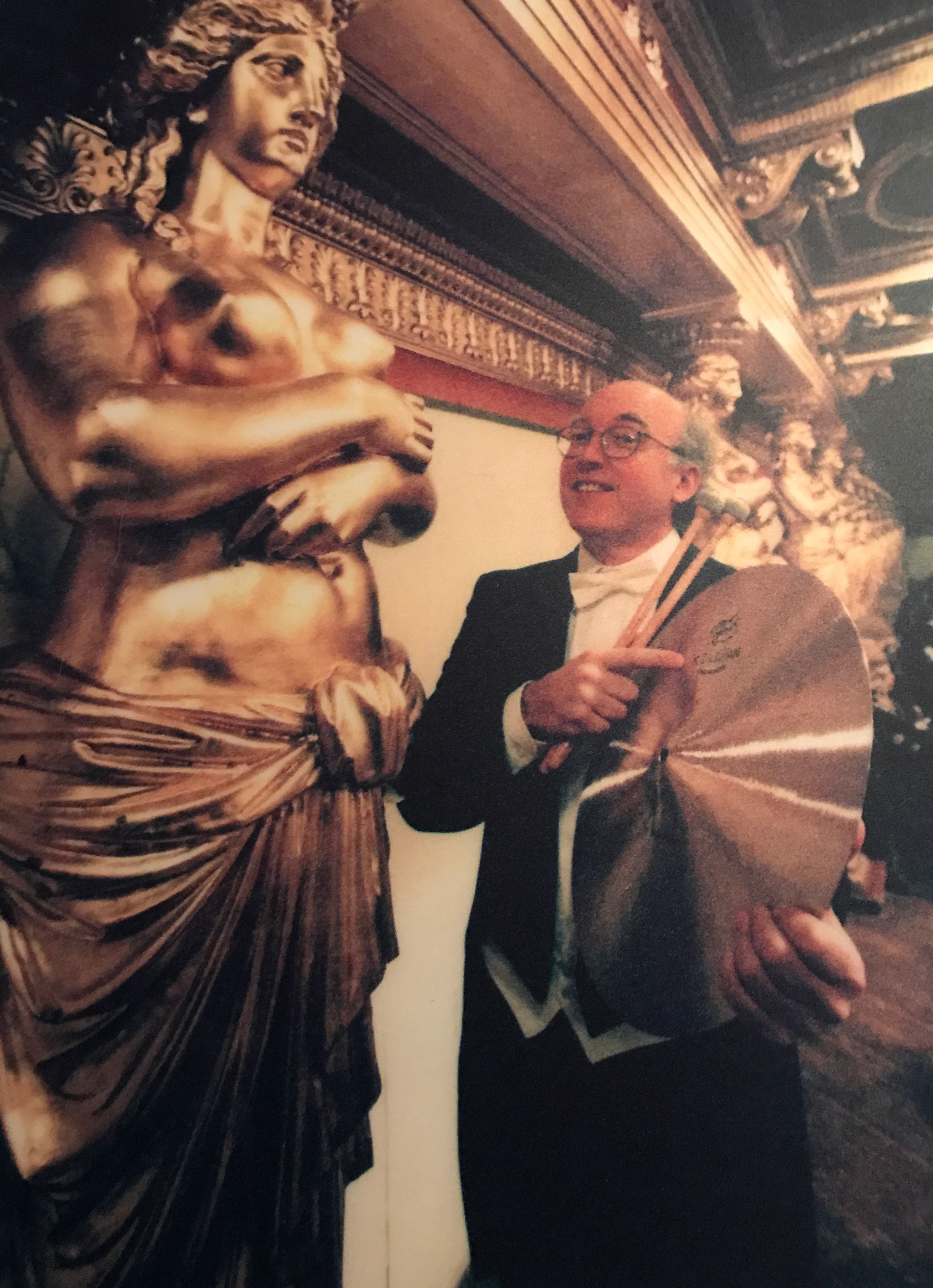 “Playing a triangle…just bang it”….What a shame.
This sad phrase I’ve heard too many times. Sad because it’s patronizing, dismissive, and illustrates the ignorance that all prejudices have. Delivered by people without the listening capacity, curiosity or imagination to consider anything beyond the ignorant, popular viewpoint. I’m sure that all experienced percussion players have encountered this—let’s change it. We excite it, strike it, tickle it, make it sing, but never bang it. That’s so crude.
That out of the way, let’s explore what’s happening with these instruments:
As you probably already know, the differences in all sounds are the result of the individual frequencies that make up that sound spectrum. In other words, timbre. Most musical instruments produce harmonics which have frequencies that follow a strict order of the ratios that each harmonic vibrates at: Specifically, integer ratios, (even multiples of the fundamental or lowest vibration) such as 440 Hz, 880 Hz, 1760 Hz etc. which can continue beyond human hearing. That’s how string, brass and woodwind instruments play scales and in tune.
However, percussion, with the exception of mallet instruments, produces overtones. Overtones differ from harmonics in that they don’t vibrate with the strict integer ratio that harmonics do, (non-integer ratios). So they don’t reflect scales or chords but rather generally have more complicated, hard to define pitch, and most often individual ratios.1
Consider how controllable rich timbrel possibilities cymbals and tam-tams have if you explore different ways of exciting them: different beaters, bowing, scraping or rubbing them-endless possibilities! Triangles, to a lesser degree, are like that too. They almost never, vibrate in chords, and if they do, will interfere with the harmonies played by the rest of the orchestra.2 Therein lies the skill of choosing the proper triangle! You should have at least a few triangles of different size, shimmer, spectrum, amplitude possibilities, and some properties of your personal description. Pay close attention to the contribution your triangle makes to the ensemble. It’s a bit like mini-orchestration. Be aware of why the composer chose to add a triangle there: what’s its purpose in the overall sound. Some conductors are sharp enough to tell you when to change your sound. It’s a good lesson.
After you’ve chosen the triangle, next-the beater.
Again, but with more detail: The principle for creating different timbres on percussion instruments: the lighter the striker, (drum stick, triangle beater, etc.) or the harder the mallet, the “brighter” the sound: (having more highs); the heavier, more massive the beater, or the softer the mallet, the “darker” the sound, (more lows are created). Each instrument’s timbre will respond a little differently as you play harder. The secret of orchestral playing is to minimize that change as much as possible.
The “legs” of the triangle tend to have a more spread sound and are another timbrel variation for an even more nondescript spectrum, but the leg tends to have less projection.
In January of 1971, I was stimulated by a conversation with Maestro Jean Morel, percussionist on many of Stravinsky’s early works. He described a rod that had a taper from one end to the other. I made one like that, but found it a bit clumsy to manipulate. I began experimenting, looking for triangle beaters that could instantly produce many different timbres, at any amplitude by simply moving the beater a little from its tip to the full body of the striking area. The outcome was my invention: the MULTI-TIMBREL TRIANGLE BEATER. An important component is the exponential curve of the striking head. That curve maximizes its potential. I’ve used the MTTB for decades in concerts, recordings and world tours with the St. Louis Symphony Orchestra. They made playing a constant adventure in sonic exploration. The possibilities are vast!
Remember, a triangle vibrates in the same way as a tuning fork: two legs, each leg moving in opposite direction. The side opposite the opening is the connection between the legs and transfers the energy throughout. If you hold the triangle with the non-leg as your major playing spot, (left or right orientation depending on your handedness), you can start near the top for very soft playing and move down the side as you crescendo, you’ll have more control over both the amplitude and timbre if you can add mass as you crescendo by moving the triangle beater to the thicker part of the playing head and strike harder. Another benefit is that you can control the light/dark sound spectrum, without changing the dynamic level, (stroke length), by simply moving the MTTB from the thin tip to the more massive thick part of the head of the beater, while maintaining the same playing spot on the triangle. That’s not so easy, or even possible, with a cylindrical beater without playing harder. The same thing happens if you play on the bottom leg of the triangle, but the sound has more shimmer.3
Another note about the importance of triangle playing: I have been involved in many percussion auditions. It becomes immediately apparent how experienced the player is. Almost all their attention is focused on developing skills on mallets, snare drum and timpani. Neglecting the “lesser” instruments: triangle, bass drum, tambourine etc. indicates that the player is unaware that much orchestra playing involves these “less important” instruments, and they didn’t get the job!
It’ll be interesting to learn what others have to add to my thoughts.

1I imagine that’s why the myth that percussion instruments aren’t really “musical”. Again, sad.
2The difference between a tam-tam and a gong is that a tam is like a cymbal: without a defined pitch center, while a gong is like a bell-pitch centered and same sound each time you strike it.
3The amount of shimmer, or spread of the sound you produce can be used to great advantage also. If the triangle is not competing with the amplitude of the full orchestra, having more shimmer often is the better choice, but for cutting through larger orchestration, less shimmer has more projection. The shimmer details would probably be masked anyway.